The Entourage Effect and Why It Matters

What is the Entourage Effect? 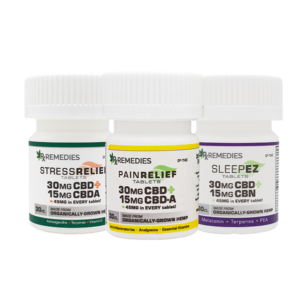 The cannabis plant is comprised of over 400 trace compounds to include cannabinoids, terpenes, and flavonoids, and many of these compounds offer individual therapeutic benefits. However, scientists have found many of these identified compounds work synergistically, meaning the medicinal effects of the whole plant (cannabinoids, terpenes, flavonoids) far outweigh the benefits of their individual parts. This synergistic relationship between the different compounds in cannabis is commonly referred to as the entourage effect.

Cannabinoids are complex chemical compounds that act on receptors in cells. This collection of receptors has been identified as the endocannabinoid system (ECS). The ECS is an extraordinary communication system in both the brain and body, which is responsible for a variety of functions, to include how we feel, move, and react. There are over 100 different cannabinoids found in the hemp and marijuana plant, however the two primary cannabinoids are CBD and THC.

Tetrahydrocannabinol (THC) has been the epicenter of cannabis research since 1964 when the Israeli organic chemist, Raphael Mechoulam, isolated and synthesized it. In more recent history, the pharmacological contributions of cannabidiol (CBD) have been demonstrated, and now other minor cannabinoids (i.e. CBDA, CBG, CBN, CBC) have captured scientific interest. 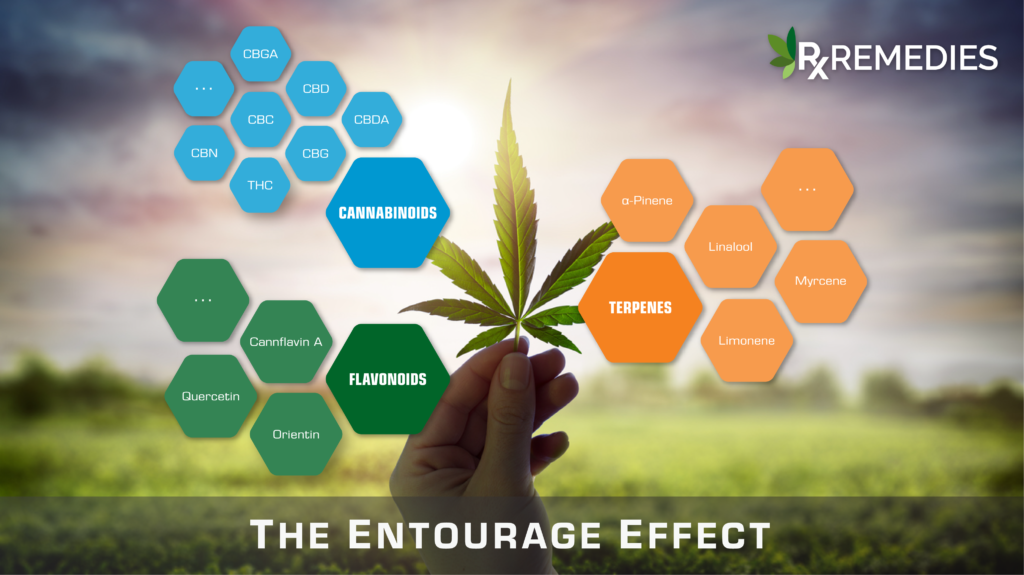 Tetrahydrocannabinol (THC): The most popular of the cannabinoids due to its psychoactivity (i.e. causes users to feel “stoned” or “high”). Uniquely binds with both CB1 and CB2 receptors of the endocannabinoid system, resulting in a range of effects on both the body and the mind. THC may help relieve nausea, pain, and stimulate appetite.

Cannabidiolic acid (CBDA): Once considered solely a precursor to CBD, CBDA actually offers a variety of medicinal and health benefits due primarily to its activation of the 5-HT1A serotonin receptors, as well as its affinity for the GPR55 receptor (both aiding in CBDA's anti-anxiety, antidepressant, and anti-nausea effects.

Additionally, research indicates CBDA inhibits cyclooxygenase-2 (COX-2) enzyme. There are two types of cyclooxygenase enzymes: COX-1 (maintains lining of both the stomach and intestines) and COX-2 (linked to inflammatory response and associated pain). Unlike NSAIDs like aspirin and ibuprofen,  which inhibit both COX-1 and COX-2 enzymes, CBDA bypasses COX-1 enzymes, and only inhibits COX-2. By inhibiting COX-1, long-term use of NSAIDS can cause major issues in the gastrointestinal tract such as bleeding and ulceration. Because CBDA exclusively inhibits the COX-2 enzyme, it shows great potential as a safer anti-inflammatory compound.

Cannabigerol (CBG): The acidic form of CBGA, and a precursor to CBDA. This cannabinoid elicits medicinal benefits through direct interactions with the CB1 and CB2 receptors in the brain. THC produces its psychoactive effects through these two receptors, however CBG is non-psychoactive, therefore will not result in the sensation of feeling “high”. CBG may have anti-inflammatory, neuroprotectant, and anti-bacterial properties.

Cannabinol (CBN): Best known as the precursor to THC, CBN is created as cannabis ages, and THC breaks down. Research suggests CBN has a greater affinity for the CB2 receptor of the endocannabinoid system (i.e. the immune system), and has been popularly associated with sedation. More recent studies suggest that CBN protects neurons from oxidative stress and cell death, thereby potentially treating age-related neurodegenerative diseases like Alzheimer's.

Cannabichromene (CBC): Another non-intoxicating cannabinoid, formed when CBCA decarboxylates. This cannabinoid binds with the endocannabinoid receptors TRPV1 and TRPA1, both of which are linked to pain perception.

Terpenes are aromatic molecules, excreted from the minuscule glands of the hemp and marijuana plant. However, terpenes are not exclusive to the cannabis plant. They are responsible for both the scent and therapeutic benefits found in essential oils (ex: the terpene linalool is what gives lavender its floral scent and calming effects). In addition to providing cannabis and other plants with their pungent scent, terpenes are used to attract pollinators, and to repel pests and herbivores. They have also been used in beauty and pharmaceutical products for centuries. Roughly 200 different terpenes have been found in cannabis, however only a few are worth mentioning, as only concentrations above 0.05% are considered of pharmaceutical interest. 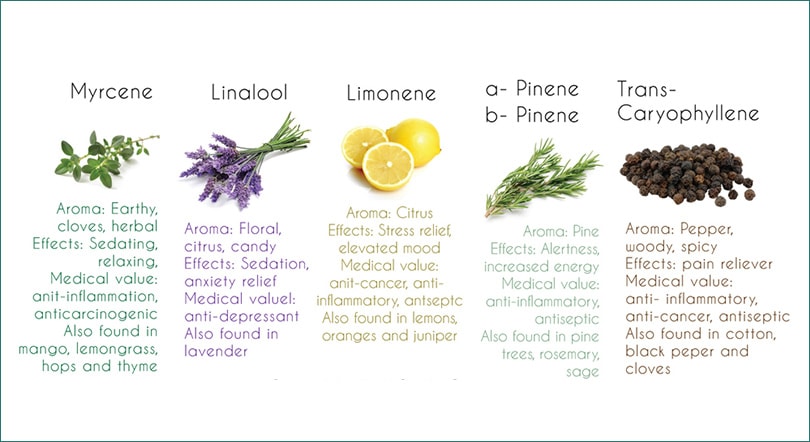 Beta-Caryophyllene (BCP): The most common terpene found in cannabis, and can also found in black pepper, clove, and oregano. BCP binds with the endocannabinoid system, specifically the CB2 receptor, which is unique to the caryophyllene family. This terpene is thought to have analgesic, antidepressant, anti-inflammatory, antioxidant, anxiolytic, and neuroprotectant properties.

Alpha and Beta-Pinene: Another common terpene found particularly in sativa-strains, pinene can be found in rosemary, basil, and most notably, pine trees. This terpene may have analgesic, antibacterial, anti-inflammatory, and antioxidant properties.

D-Limonene and L-Limonene: These citrus-smelling terpenes are most commonly found in lemon rinds, orange rinds, and juniper, and assist in the absorption of other terpenes. This terpene may have antidepressant, anti-inflammatory, and anxiolytic properties.

Myrcene: This sweet and hoppy terpene is most commonly found in (you guessed it) hops, as well as mangoes. This monoterpene may have analgesic with sedating properties, as well as powerful anti-inflammatory effects.

Linalool: This mildly floral terpene is most commonly found in lavender and jasmine. For thousands of years, linalool has been used as a calmative, and may have anxiolytic and sedating properties.

Flavonoids are a diverse group of plant chemicals called phytonutrients, which are found in almost all fruits and vegetables. As previously mentioned, flavonoids are also found in cannabis, and account for roughly 10% of the plant’s known compounds. Flavonoids found exclusively in cannabis are called cannaflavins, and similar to terpenes, effect how we experience cannabis through our senses. Flavonoids are what give cannabis its pigmentation, odor, and flavor, while also providing various therapeutic benefits (namely antioxidant and anti-inflammatory). 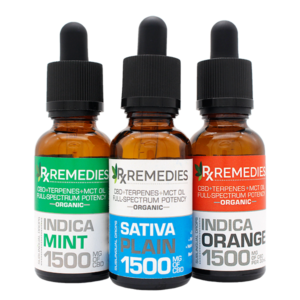 At Rx Remedies, we believe plant medicine is real medicine. And with all of the different compounds found within the cannabis plant (cannabinoids, terpenes, and flavonoids), we believe there is a significant amount of medicinal science to be understood and applied in product development.

We don’t just use whole-plant, full-spectrum CBD oil in our products. We further include concentrated terpene profiles, as well as additional plant-based, active ingredients, for the most comprehensive and effective plant-based medicine on the market. And all products are researched and formulated by our board-certified toxicologist and pharmacologist.

Research indicates inflammation in the body and anxiety can manifest through multiple ailments and symptoms. Although CBD is all-natural and our primary active ingredient, it is only one of the many plant-based compounds that we include in our products. We know when you are seeking relief, you just want a product that works for you. And you shoudn't have to spend hours of time researching to find that product. So, our promise is simple: to formulate the most effective, 100% plant-based remedies for optimal relief. It shouldn't get more complicated than making a product that works.

Have questions about cannabis? Not sure which CBD product is right for you?

Contact us at support@rxremediesinc.com today. We are here for you.